John was born in Llanfabon Parish, Glamorganshire, South Wales at the end of 1783. He was Christened on 28th January 1784. 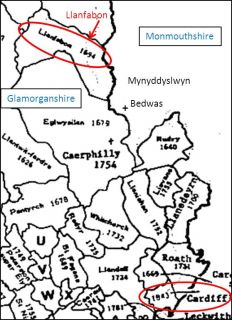 John's parents (according to IGI) were Margaret and William Nicholas of Llanfabon Parish.
1810
John married Ann Walters from Gelligaer, Glamorganshire, on 17th November 1810 in Bedwas, Monmouthshire (see map above).
He was 27 and she was 19.
They had the first of twelve children the following year (see family tree diagram under Ann Nicholas section - link at top of page)
1841
John is recorded as a farmer (age 58), living at 'Penyquary', Mynyddyslwyn (on the border of Monmouthshire and Glamorgan) with his wife Ann (age 50) and 9 children. (modern name of farm - Pen-y-cwarel, 1 km N.W. of Ynysddu, 6km N. of Caerphilly) 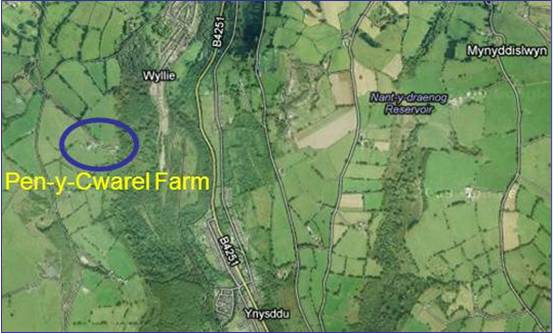 From a visit a few years ago by another descendant (Elaine Williams), the following was communicated to Phyllis Poynter and passed on to me:
"It is now known as Penychwarel Farm. We were told that the family bred and "broke in" welsh mountain ponies for the Pit.(colliery). They did this by riding them through their pond and muddy banks until they were broken ... itis said that they bred ponies for the pits and broke them in on the farm by forcing them through a pond and all the marshy land around (it's not there now) so the stables must have been very important. Also the family were great followers of the hunt and horses would have been very important for this. It's thought they also kept a pack of hounds for hunting so they must have had a lot of money."

They are both buried at Hengoed Church Cemetery. John and Ann Nicholas share a 4-sided monument with William Lewis (1751-1841) and his wife, Ann (1756-1841) who were from Gellegaer Gwelt Parish in Glamorgan Co., Wales. 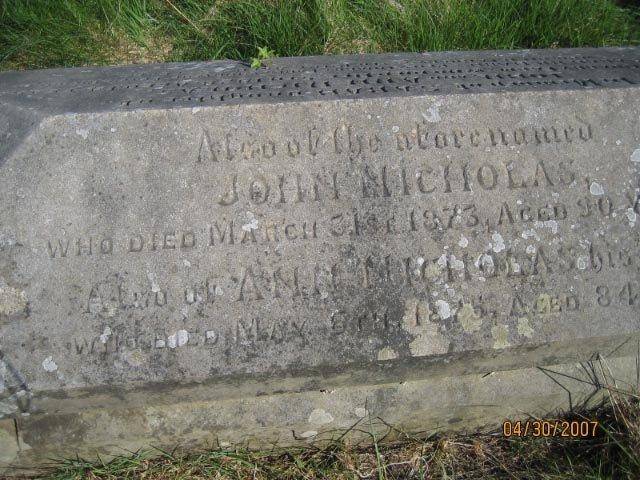 The following is a brief summary of what I've found regarding John and Ann's children: