< Back to John Jenkins >

This page has been created to illustrate the background to the maritime world of Aberystwyth that my Great Grandfather John Jenkins would have been familiar with during his sailing career. It includes material from a number of sources, but I am particularly indebted to Nick Tudor-Jones (the Great Great Grandson of Thomas Jones, Aberystwyth, ship builder and owner) for sharing some of his photographic archives.

As the main coastal town in northern Ceredigion, Aberystwyth was the natural centre for the large amount of coastal shipping that was trading with the area in the 1800's. It gained the Customs House from Aberdyfi in 1763 but suffered from a shallow sand bar at the entrance to the harbour which restricted the size of ships able to use the port. This was helped when major improvements to the harbour were constructed in the late 1830s - the old wooden quays being replaced by a stone quay. A long stone pier was also built near the entrance which improved the flow of water and reduced the sandbar. The proposed plans below show the changes that were made to the harbour.

As with most coastal towns in this period, local shipbuilding grew with the increase in coastal trade in the Nineteenth Century and Aberystwyth was no exception. The main area for building ships in Aberystwyth was at Tan y cae (shown in the 1834 map below) 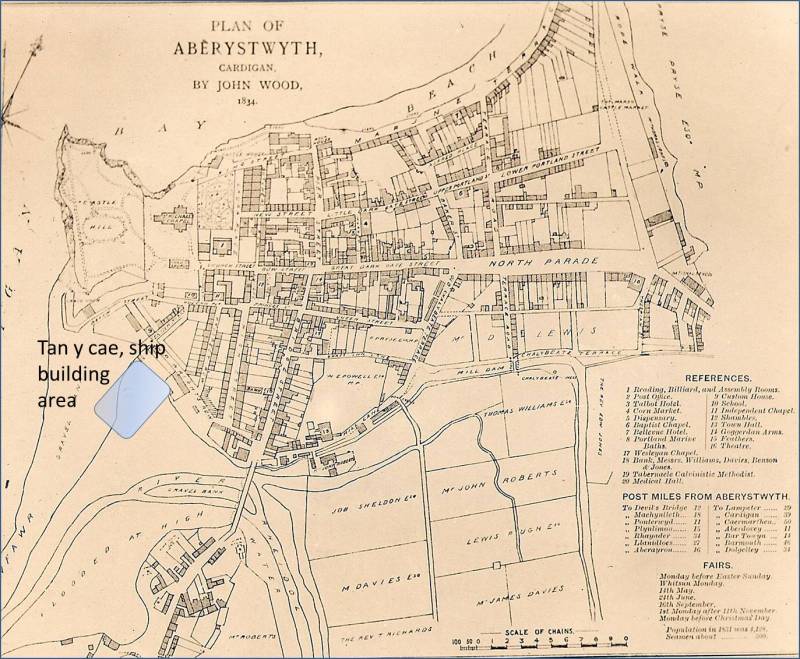 As early as 1797 the drawing below shows vessels being built in this same area (in front of the castle ruins to the left of the picture). Note that the wooden bridge across from Trefechan was a temporary structure after the earlier stone bridge was washed away and before the new one was constructed. The horse is pulling a barrel of water from a well in Trefechan as the town did not have its own good water supply.

In the decade 1790-1800, 20 vessels were built, totalling 1,110 tons and these were typically small sloops of around 55 tons each, though at least one larger vessel was built - the James of 361 tons, owned by Harvey & Co., registered in Bristol and trading to Jamaica.
In the 1830s a similar number of ships were still being built and there were three shipbuilders listed in Pigot's Directory: Rees Davies of Shipbuilders Row, Foulke Evans of Bow St and Thomas Williams of Pier St.
By 30 years later (from 1860-1870) shipbuilding had grown and 33 vessels were built, totalling 4,013 tons. These were mainly schooners, each of around 80-100 tons plus a few brigs of 200 tons and some barques and brigantines of around 350 tons. This was the high point of shipbuilding at Aberystwyth.
The picture below shows vessels being built in c.1870. The square building in the very middle of the picture with a veranda at the front is the Customs House. To the left, in front of the castle ruins, are the sawmills which used the wood stacked on the very left of the picture on Rofawr in the yard of Thomas Jones.

A similar view from the 1960s shows the same distinctive back-to-back houses on Shipbuilders Row on the right of the picture but the stone harbour wall now extends over most of the old yards and houses have been built over the sawmills and Customs House. The history of this area is also presented in a short audio that can be found at < http://www.harbourvoices.org.uk/trail/ >, article 4.

By the 1870's the number of vessels being built was starting to decline as more of the coastal trade was taken by the railway network (from 1870-1880, only 15 vessels were built, totalling 2,537 tons) and the last ship was built in 1881. In this later period there were three main shipbuilders and each had his own area at Tan y cae as shown in the card below by an old Aberystwyth sailor William Owens (b.1852) drawn in the 1930s. Note the fencing used to delineate the yards and the simple timber supports propping up the ships. 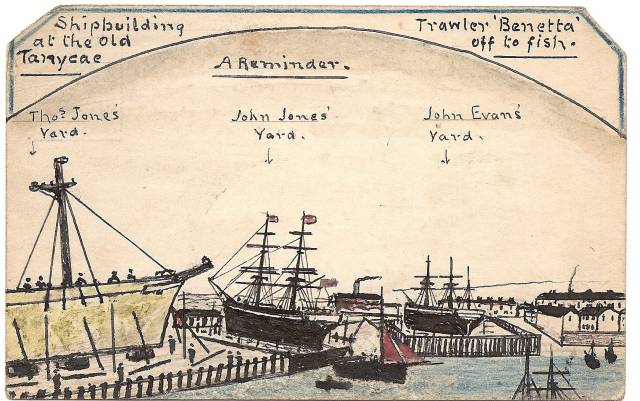 Another simple sketch of the yards in 1870 clearly shows the stacks of wood on Rofawr to the left, the smoking stack of the steam driven sawmill in the centre and miscellaneous work sheds near to the ships under construction in the three fenced off yards 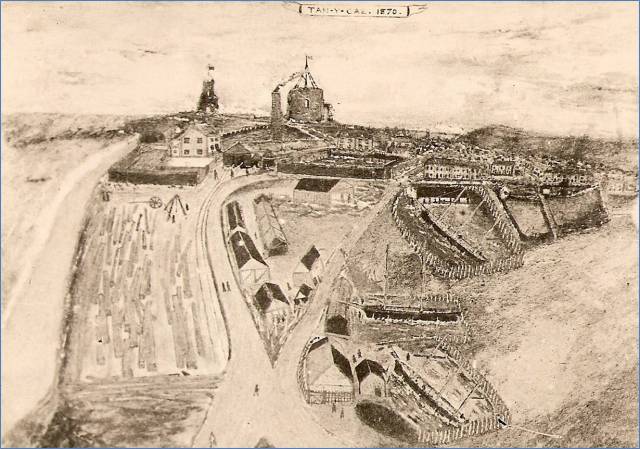 Here is a photgraph from 1866 showing the brig Sir Robert McClure (53045 of 197 tons Register) nearing completion in the yard of John Evans, clearly showing the supporting timbers and protective fence. This view is looking south-east towards the Trefechan bridge. She was launched on Saturday 17th March 1866 with a ceremony watched by many people (see link from table below). 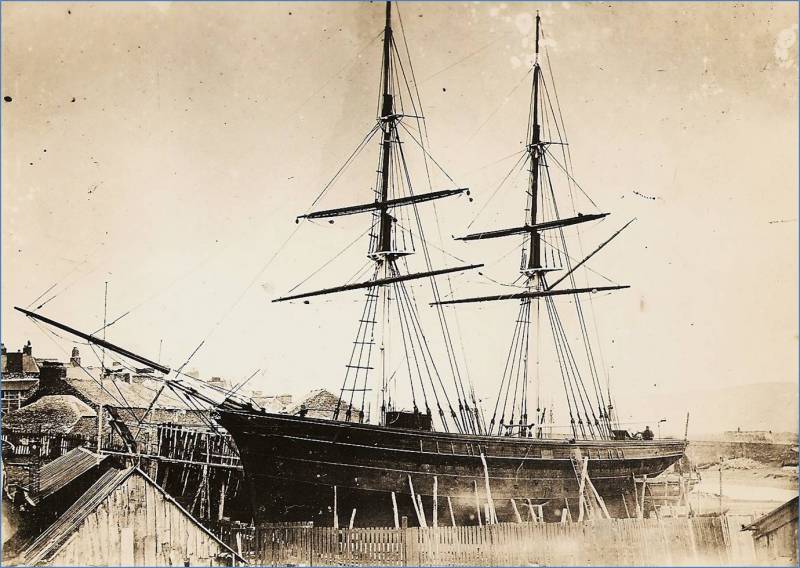 A similar event from the same yard was also captured by William Owens. 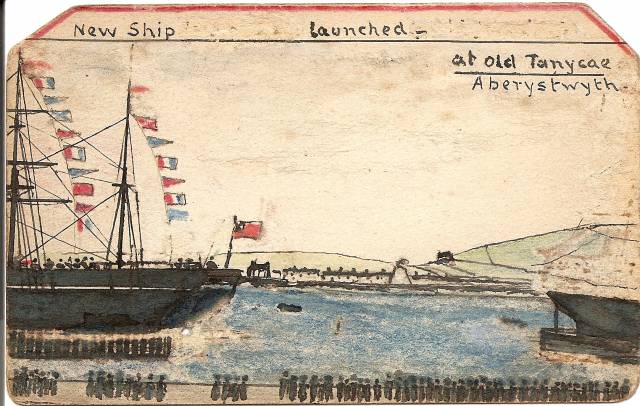 The harbour was also captured in its heyday in another card by William Owens - full of ships of all sizes floating on a spring tide. 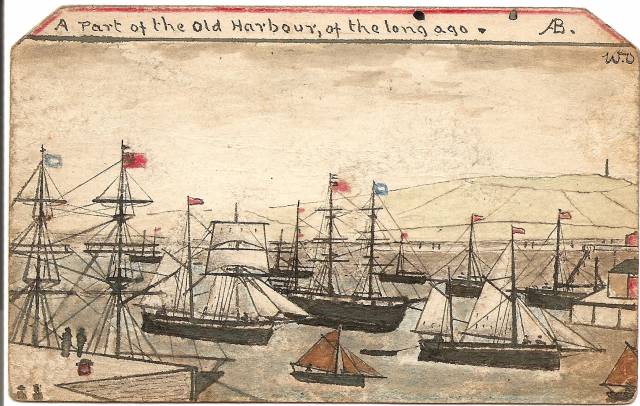 And a view at low tide, when the local cows seem to have taken possession...

The trade of Aberystwyth harbour was described in Slater's Directory (1880) as follows:
"The shipping business consists in the exportation of lead and silver ore, and a small quantity of copper ore. The imports are timber, shop goods and other merchandises from Liverpool, Bristol, and London; groceries, coals, slates and slabs, flagging, bricks, flour, fish, limestone, &c. There are three ship building establishments, an old established rope walk, a sail manufactory, steam saw mills, a large engineering and iron and brass foundry, &c. The number of vessels belonging to the port on 10th of January, 1877, was 292 sailing and 3 steamers; total 295, with a tonnage of 37,944."
These vessels were registered at the port but most were not built in Aberystwyth. Many were built in other North Cardiganshire ports such as Aberdyfi and Newquay, while many others were built in other UK coastal towns or were bought from overseas. A number of larger vessels were bought from Canada since the abundance of local wood made these ships much cheaper to build than those built in the UK.
The following table summarises the majority of ships built at Aberystwyth from 1860 onwards (plus a few from earlier in the 1800s) and highlights some of the main shipbuilders and owners - namely Thomas Jones (elder and younger); John Evans and his son John Faulk Evans; John Jones (Trefechan) and David Jones.
More details of some vessels (including pictures) can be found by clicking on 'more' in the final column.